The ITZA Ambi-Microphone made by the late great Mike Skeet 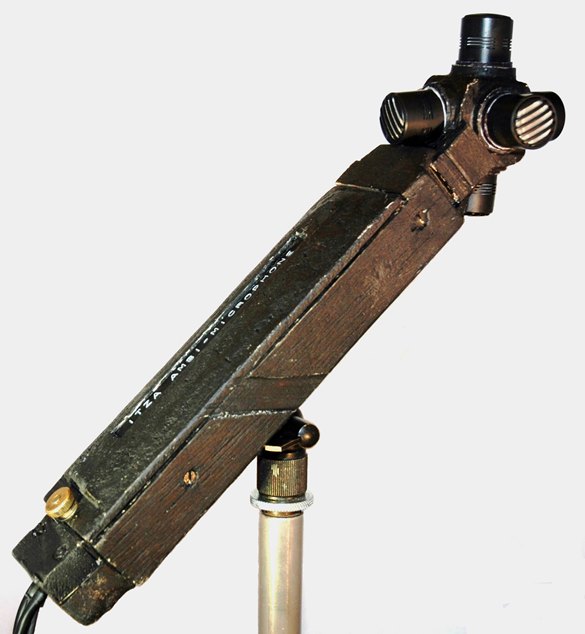 The Ambi-Mic makes use of six cardioid capsules, as closely spaced together as possible, with the directionality of each of the opposite pairs, directly related to one of the three natural acoustic vectors around the array  front to back, side to side and up & down.

A & B are pair one, C & D the second pair, with E & F the third pair. Viewed from behind the array, as is usual when you set up to record in an ambient situation, you have A facing forward, and B of the pair facing backwards. The side to side pair has C facing left and D facing right. Finally, up and down from the array, you have E upwards and F downwards.

In the writer's case, the initial use of the rig has been with a DIY kit, using plug-in Vero Boards units, providing six balanced input SSM2018 chip mic amps, phantom powered, each with stepped gain controls over a range of 60dB. Plug in Vero Board units provide the virtual earth circuits using 5532 chips, for the range of recording in ambient situations, Mono, Stereo, and various Surround recording applications, including Height. An inherent aspect about virtual earth circuits is that they provide 180 degree phase inversions, necessary for the Mid & Side processing needed for all the uses the array, apart from also easily providing up to 10dB of gain, if needed in the decoding, or for the headphone monitoring. Also there are no capacitors in signal path of these circuits.

For basic Mono use, you can use capsule A as a Cardioid, or sum it, in phase with the B capsule, to get an Omni, or sum it with the B feed out of phase, to get a Figure of Eight. Subtleties in the polar patterns can be created, by changing the ratio of the levels obtained from each of the capsules.

For Stereo use Mid & Side processing is used. M&S has the advantage that the centre of the soundstage is directly covered by the facing forward Mid microphone, fed equally in phase to both the left and right of the intended stereo. For the Side feed you create a Figure of Eight with the C & D side facing capsules. You keep the phase of the C capsule as the same phase as the Mid. You invert the phase of the D capsule and then sum it with the C capsule, to produce a Figure of Eight.

The variable stereo width is produced by mixing this figure of eight Side mic feed, in phase with the Mid, to the left stereo, and phase inverted to the right stereo feed, the same levels in each feed. In basic terms, the use of a cardioid Mid, produces crossed hyper cardioids in the stereo  small rear pickup with 'out of phase' lobes.

In addition, with a cardioid Mid, you can have a very clever 45 degree up and down Tilt facility. This is by mixing into the Mid feed, either the E upward or the F downward feeds. You reduce the original Mid feed by around 3dB to maintain a similar stereo width.

You can go further with Surround recording use. This is with the capture of the Height aspect of the live acoustic. It works with four ceiling placed loudspeakers, two front to back of the sweet spot listening position, and two side to side of this position. The front to back Height feeds, come from the upward facing capsule E, and then capsules A & B as a figure of eight  the B phase inverted. For the side to side Height feeds you have the E capsule and the C & D as a figure of eight, the D feed phase inverted.

If one goes back to the Ambisonic days, with four loudspeakers in a square layout around the listening position, or even Periphony, plus four loudspeakers above and another four below, all evenly spaced from the listening position. However, having any floor placed loudspeakers in domestic situations is not practical  leave that to University and Research establishments! You could actually carry on beyond using these twelve loudspeakers. Eighteen are possible by also using direct feeds from the unit's six cardioids!

Of course, this takes us back to the B Format, W, X, Y & Z days and their use for all the features listed above. The Ambi-Mic can easily provide these four signals  the W omni by summing all the six capsule's outputs. The X, Y & Z feeds are the three figure of eights obtained from the A & B pair, the C & D pair and the E & F pair, as detailed earlier. The summed W omni feed needs to be similar in level to that from the X figure of eight.

The Cardioids needed for the Mid & Side processing, for the many B Format uses, already physically exist with the Ambi-Microphone approach, with the advantage of being directly related to the three Vectors which exist in the acoustic surrounding the rig.

In the writer's case, the Surround use of many different mic rigs used, is just an addition to the stereo mix on the day, which would be what you are paid for! So the raw mic feeds are captured on either 4 channel or 8 channel recorders, and their line level outputs used in DIY kit to obtain the stereo.

It is worth mentioning that some outdoor use for Surround + Height, has gone as far as eight omni mics, appropriately incorporated in a 'dummy head' rig, with windshielding using Flour Sieves & Ladies Tights! Omni mics have so much less handling or wind produced problems, compared to any directional mic. The Stereo from just the front forward ear spaced pair is, in effect Binaural, particularly suiting Headphone listening, but none the less also comes over fine on stereo loudspeaker pairs.

Now with the recently available eight channel Edirol R88 recorder / mixer, used for the raw capture of the six feeds from the Ambi-Mic, there turns out to be an interesting further use. Its on-board mixer is excellent for one's usual M&S stereo uses, with it's versatile M&S decoding available on any of the input pairs, but to obtain the figure of eights from two cardioids, a separate DIY kit has to be used.

In the writer's case, the raw six channels from the Ambi-Mic do not go to the on-board mixer, but come out at line level to the DIY unit. This DIY derived Stereo is fed back to the R88 on channels 7 & 8, which alone are sent via the on-board mixer, with the chance to trim the overall level and even subtly alter the left/right balance, something not always available after M&S decoding.

The EQ facilities on the R88 have proved to be very useful in getting subtle changes in either the LF, variable MF frequency, or the HF, depending what the nature of a venue's acoustic has on the overall sound captured. The result is saved on the R88, and also fed out on an AES EBU feed, which the writer takes direct to an Edirol R4 Pro, as a back-up. Later Re-Mixing is of course possible.

The DIY unit also provides the multi M&S processing for the Surround + Height listening, with replay of the original Ambi-Mic feeds. Bear in mind that the Surround use would require the rig to be pointing horizontally, especially for any Height addition ventures! Hence the DIY kit stereo use of the tilt facility has proved to be very useful. Note that none of the Ambi-Mic's six channels recorded go directly into the R88 mixer stage, as there would be an additional D to A, and a return A to D from the DIY kit, compared to any direct on-board mixer use of the six raw feeds, due to a Latency problem? 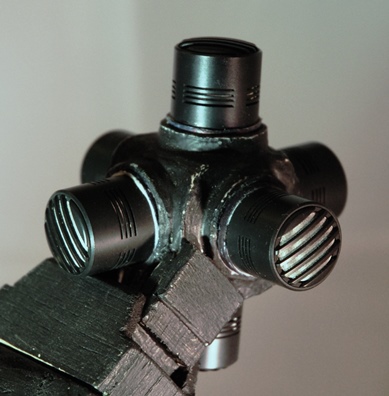 The Ambi-Mic includes the PCB circuitry, in its main body, to provide the balanced outputs and allow 48V phantom powering. Three 5 Pin XLRS, via 'quad' cables are used for each pair of the six mic feed outputs. Note that the opposite wires of the four in the quad are used for each of the two mic feeds. Serious 'cross talk' occurs if you don't do it that way! Also used is a Mogami mic cable with six separately screened balanced feeds, available from HHB. 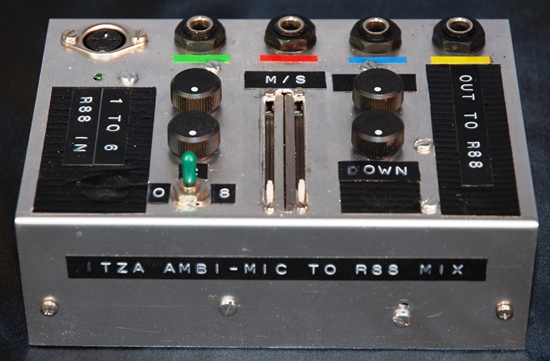 This unit is for the 'out and back-in' Ambi-Mic feeds stereo use discussed earlier. The connections from, and back to the R88, are all unbalanced and with no problems. The plug in, two channel 5532 chip virtual earth circuits need 15-0-15 DC volts power inputs. Eight track Vero boards, 35mm long and 22mm wide, are used. The rest of the circuitry is traditionally 'hard wired'. Monitoring is done directly from the R88 recorder, as mentioned later.

There are basically two halves to this larger DIY unit. The left hand part offers the same facilities as the DIY box is for the 'out and back-in' Ambi-Mic feeds stereo use discussed earlier. Additionally headphone or loudspeaker monitoring of the stereo is available. A Mono button lets you check that a centre image is accurately being provided by the headphones or the loudspeakers.

The right hand half of the unit provides the four variable width feeds, via M&S faders, for the later Surround + Height use. In addition there is a Centre loudspeaker feed, derived from the front Mid fader feed, with an additional level trim control. At a normal stereo recording session, each of the Surround feeds, not plugged into, can be individually checked with the headphone monitoring of the unit's left half.

Additionally, that essential 'Surround Visual Monitor', the Jelly Fish display from DK Audio, can be plugged in to the Surround outputs, for judging the Front, Rear and the Centre, 5.0 Surround. Checking the Height feeds is done by maintaining the Centre feed as a 'reference' and replacing the Front & Rear by the Front to Back and the Side to Side Height feeds. Also available are the four W, X, Y & Z feeds mentioned earlier.

In addition to that, there is Tabor Audio's 'The Box', originally invented by Frank Fox in the 1980s. The writer finds it so useful in judging the state of the stereo signal, apart from actually listening to it! For session recordings, as opposed to concerts, there is the Talk Back mic feed to a small remote Talk Back loudspeaker, placed near the performers.